With the warmer weather finally making an impact here in Sydney, it’s only appropriate to be whipping up so many salads. I mean how easy and simple. Following the KISS principle and relying on good quality produce, you really can’t fail. I had often heard about the Italian bread salad called Panzanella. While I’m not sure the version I tried was “authentic”, the flavours were mesmerising and unforgettable. While I was scanning my local deli the other day, I came across a product I had never seen before. It was called Tanour Mountain bread and the packaging explained it was Afghan in origin. It was very similar to the Greek style pita bread and looked similar to a large cooked pizza base. Not one to shy away from trying new things, I quickly snapped it up and started thinking of ways on how to use it.

With so many ingredients left over from my Thai Beef Salad, namely the cucumbers, tomatoes and red onions, I came up with this recipe. I tore the tanour mountain bread up in small bite size pieces and threw it with the cucumbers, red onions and tomatoes. To “Greek” it up a little I used some dried oregano leaves and made a dressing out of extra virgin olive oil and red wine vinegar. It was really refreshing. The vinaigrette had soaked into the bread, the cucumbers were crisp, the tomatoes were bursting with goodness and the red onion provided that extra sharp “sweetness”. A perfect summer meal.

While there is no need to follow an exact recipe, its best to experiment sometimes. I just took the basic principles behind a Panzanella salad and applied them to what I had available. I’m sure this salad would work just as well if I had used a rustic style Italian bread. Maybe the addition of some fresh herbs would work wonderfully. Overall a fantastic result. 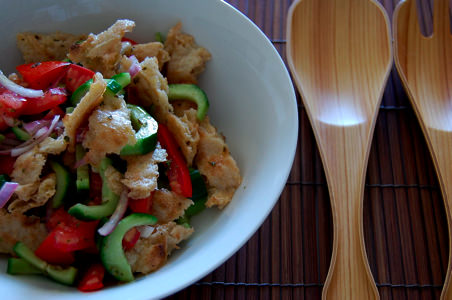