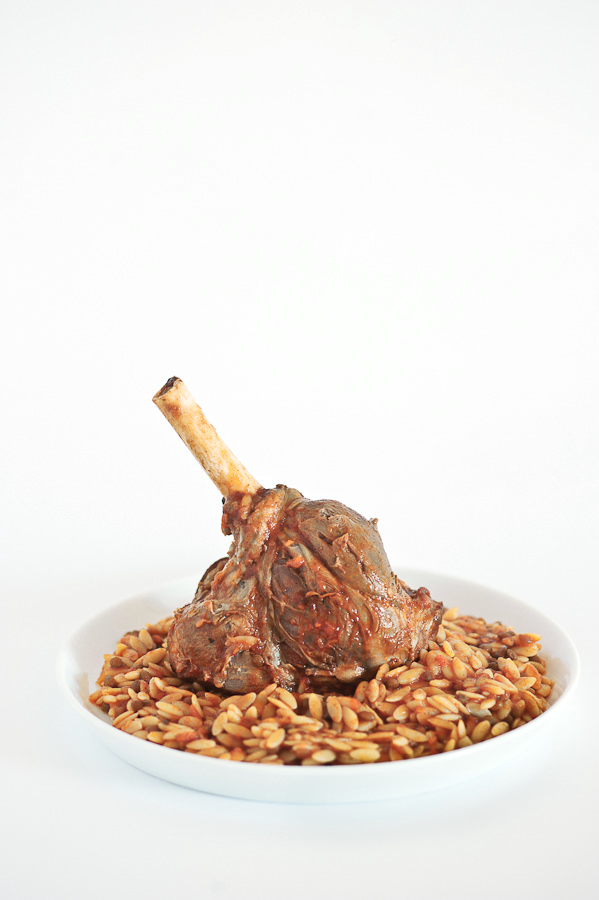 I screamed like Fred Flintstone when I saw the size of these lamb shanks!  They were enormous.  Huge.  Think “meat on steroids”. (Although I can assure you they were organic and tasted as “real lamb” should).

I prepared the lamb using a Greek recipe called “giouvetsi” or youvetsi.

Giouvetsi is traditionally baked in clay pots and can be made using either chicken or beef. The meat is braised for a number of hours using a variety of spices and tomatoes. In the final stages of cooking you add some rice shaped pasta (orzo) or hilopites (Greek home made dried pasta) which then cooks in the tomato/stock sauce.  I had some pre-cooked lentils lying about in the fridge that I didn’t want to waste and added them along with the orzo.

Ten minutes later I was sitting down to a very hearty, comforting and warm meal.  (in reality I was eating this for two days-I had plenty of leftovers).

It’s a little similar to my cinnamon braised lamb shanks recipe,  however I’ve added a few more spices to this lamb giouvetsi and cooked it all in the one pot.

P.S. I shot these photos quite bare to really make that lamb shank stand out.