I was away and managed to miss most of the festivities.  So far, I've had quite a slothful start to the new year.  I hope this is not a sign of things to come!  (Perhaps a better word would be "relaxing" rather than slothful!).A few weeks ago I made soutzoukakia.

Don't be put off by their hard to pronounce Greek name.  They are basically meat balls shaped like asmall sausage.  (Mine are probably a little longer than the usual plump soutzoukakia you find in many Greek taverns).

I can remember these being present at many Greek gatherings and barbecues whilst I was growing up.  The funny thing is I haven't made them in ages and I'm actually glad I got a chance to play around with them recently.  They were delicious and almost like I remembered them.  I cooked mine on the stove top using a griddle pan and then finished them off in a pungent tomato sauce flavoured with cinnamon.  Cooking them in a sauce like this changes the name of the dish to "soutzoukakia Smyrneika".

It's a reference to the Greeks who left Smyrna and brought this dish with them to Greece.

Politics aside, the sauce is delicious and works well with a side dish of rice pilaf, mash potatoes or french fries.  I've served mine with some steamed rice and some blanched green beans. 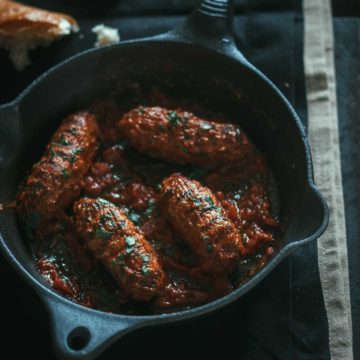 For the tomato sauce:

Serve immediately with rice, mash or fried potatoes.  For a little treat I like to serve any left over soutzoukakia (the next day...if there is any) at room temperature sandwiched between a cut baguette.  Beer, crisps and I'm set! 😉