It's funny you know.  When my parents decided to move back to Greece my mother asked me if I was interested in any of her beloved kitchen items, I jumped at the chance and asked for one of her Bessemer pots (I couldn't be greedy and ask for all of them?...could I?).

To bring back a little nostalgia I'm cooking up a Greek dish in honor of all the Greeks here in Australia who use this product.

I braised some lamb shanks in a tomato sauce that was flavored with cinnamon.  I love this flavor combination.

I know a lot of people aren't keen on cinnamon and you could omit it but it wouldn't be the same in my opinion .   Originally I wanted to braise some goat but couldn't source any  however the lamb shanks work well.

Just a note- your house will really take on an enticing aroma when you are cooking this dish-you have been warned!

A traditional way of serving this would be with "hilopites"- a Greek home made pasta. I didn't have any on hand at the time, so I used some dried egg noodles.

After a few hours of braising the shanks in your Country Kitchen pan, the meat should be falling off the bone.  I like to pull all the meat off the bone and add it back to the rich, red sauce and serve it tosssed with the noodles. For a final Greek touch grate some "mizithra" over it-if you don't have any Pecorino or Romano make good substitutes. 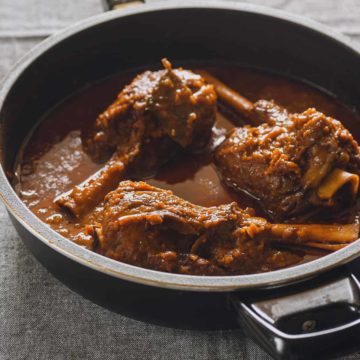