Whenever I heard the word "papoutsakia" in Greek cooking, I would fall into mad hysterics. To anyone who doesn't speak Greek, "papoutsakia" literally translates as little shoes!

Me: what's for dinner tonight?

And on it went!

Basically to the uninitiated, the dish is eggplants stuffed with cooked mince meat and topped with a cheesy, béchamel sauce. The dish receives its name because the eggplants look like little shoes when they are cooked.

I like to think of this dish as a mini moussaka.

Ok, I know there are no potatoes or zucchini present but the taste is quite similar.

Pastitsio will always be my true and first love but these stuffed eggplant come a good second. It must have something to do with the béchamel sauce.

The dish might seem a little rich, especially for summer but this is when eggplants are at their peak.

I also like to prepare these a day ahead and serve them up the next day.

Heat them up in a warm oven or let them come to room temperature and serve them with a nice Greek salad and some crusty bread.

And like most things in Greek cooking nothing goes to waste.

The scooped flesh from the eggplants is added to the meat sauce.

I also like to spice up my sauce by adding a little cinnamon and ground cloves.

The béchamel is enhanced by adding grated kefalotyri.

This hard, salty cheese adds another level to the whole dish. If you can't find kefalotyri you can easily substitute Parmesan, Pecorino or Romano. 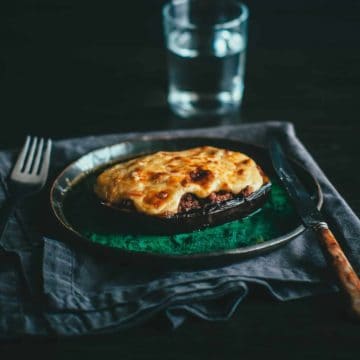