If you placed lamb, chicken or beef in front of me naturally I would go for the lamb.

Like anything though, it's good to take a break otherwise things can get quite monotonous and boring.  For the first time in a long time, I prepared a roast beef for a dinner party I held a few weeks ago.

One of the guests, who is also a good friend of mine,  isn't really into the "gamey" taste of lamb.  So off I went in search of something different.

As soon as I saw the slabs of Angus beef at the butchers I knew I wanted to play around with this protein.

I chose a rump roast that weighed approximately one kilo and had the butcher apply a "net" over the roast to help keep its shape whilst cooking.

I have to say-it was a fat little thing!

I was a little concerned that it would come out a little too rare but I used the "touch method" to determine it's done-ness.  (I highly recommend you get a meat thermometer if you really want to be sure-every cut of meat is different and so is every oven).

To help the roast  beef recipe along I made a chimichurri style sauce.

Not really sure if it's the "real deal" but it certainly tasted great.

I used one half of the chimichurri sauce as a marinade and the other half was served as an accompanying sauce.

I marinated the beef the night before I cooked it and allowed it to come to room temperature one hour before I began to roast it.  There wasn't much marbling in the actual meat itself, so I took the "slow approach" when cooking it.

For the first half hour I had my temperature at 180 deg C and then I dropped it down to 160/155.  I made sure to turn the roast beef every half hour and baste it in the combination of juices and marinade that had made their way to the bottom of the pan.

I served it up with a roast corn salsa to which I also added a can of rinsed black beans.

Add some coriander rice on the side (and don't forget the crisp Sauvignon Blanc!) and the main course was served.

P.S. All leftover roast beef was turned into sandwiches! 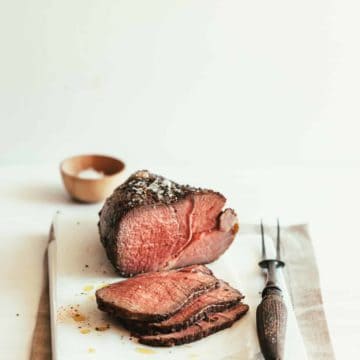