Another big Greek word and another Greek dish.

Don't let the unpronounceable name of this dish put you off. If you have excess zucchini laying around make them immediately!

”Keftedes” are the Greek word for meatballs however there is no meat in today's recipe.

I’ll be completely honest here and say that I have never made these zucchini fritters before. I enjoyed them a few times growing up and mostly ordered them at restaurants when I was visiting Greece.

I’m happy to say I’ve made these twice now and I'm delighted at how they turned out.

When I was researching kolokithokeftedes I came across Peter from Kalofagas’s recipe on Google.

I was specifically drawn to his recipe because he baked these in the oven rather than lightly fry them on the stovetop.

I must admit, initially I was skeptical that these would hold their shape.

However, these turned out fantastic! Thank you Peter!

I’ve modified the recipe a little in that I did not use any breadcrumbs in the mixture. I wanted to make these zucchini fritters gluten free and substituted almond meal or almond flour. Again, they held their shape beautifully.  (the dough was slighlty "wetter" but still good).

If you plan on making these zucchini fritters, don’t skimp on the herbs. Going by the recipe I used fresh parsley, dill and mint. I added a little extra dill because I love dill. I encourage you to play around with the ratios and find the right combination that suits your palate.

The feta gives them that wonderful cheesy, salty goodness. Use the good stuff If you you can!

I accompanied our little soirée with a tomato and feta salad, dressed in olive oil and dried Greek oregano and served the zucchini fritters with a ”herby” Greek yoghurt mixture.

Brunch, lunch or dinner-you’ve got to make these! 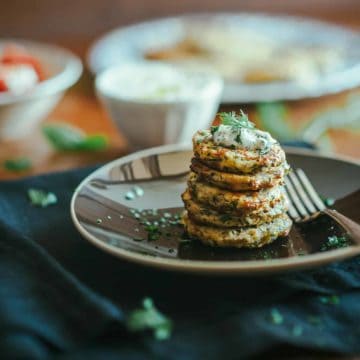