In my continuing efforts to try and "Greek-ify" recipes, I came up with this mushroom and haloumi burger while developing a recipe for the Australian Mushroom Growers Association.

While I enjoy most of the mushroom varieties, it's the Portobello mushroom that I can have the most fun cooking with.

Their larger size allows them to be stuffed with a variety of ingredients-think of them as a mini "plate" and add whatever you like.

I also like the fact that they are big and "meaty" in texture-so you can add them in hearty stews and casseroles for an extra protein boost.

Personally, I think cheese works well here and that's what I've gone with today.  I wanted to take it a little further so I came up with this concept whilst surfing the net. 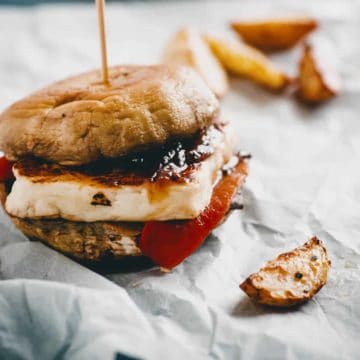