Yes, even I was skeptical.

It's a term I don't often use to describe myself, but in this case it’s true.

If you had told me a few months ago that you could make ice cream using frozen bananas and an avocado (of all things!) I would have laughed in your face!

And probably dismissed you in the process.

Now it's me who has egg (or should I say ice cream) on my face!

When I read JJ’s recipe for chocolate vegan ice cream I was intrigued. “Intrigued” is a term I often use when I see a new technique or process in cooking.

Again, I had to ask myself “how could it be that a few frozen bananas and a humble avocado can make that delicious looking ice cream?”

Yes, I may be late to the party with certain things but I'm definitely no party pooper!

Then I saw Kristina from “The Hungry Australian” whip up a batch of the same vegan ice cream but instead of chocolate she used strawberries.  Her vegan ice cream recipe looked fantastic!

“Ok..I have to make this. The signs are there”.

So instead of fluffing about with custards and eggs, I whizzed up the ingredients in my food processor, added a few frozen raspberries and let the magic happen.

And boy was it magical! My taste buds were doing a happy dance for a few days.

I can honestly say that this is how I will be making all my ice cream in the near future. It’s just so easy!

Yes, there is a slight banana taste but it’s nothing over powering.

Thank you JJ for the inspiration! 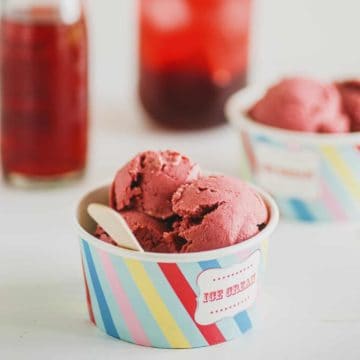