If you're reading this from overseas and you're not familiar with the term, the word is an acronym. It stands for Australian and New Zealand Army Corps.

It's Australia's day of commemoration.

Traditionally, it honours the lives of soldiers who fought in the First World War.

But in recent times, it has also taken on to remember the men and women who served in the various conflicts Australia has participated in.

The Importance of The Anzac Biscuit

You're probably wondering "what on earth do these biscuits have to do with all of this?".

These biscuits are a tradition stemming from the First World War. They were made and sent to the soldiers because of their shelf life.

As you can imagine, any food that was sent via ship in those days spoilt very quickly. The wives and mothers of the soldiers (who were in Australia) came up with a recipe that would not spoil. There are no eggs used in Anzac biscuits.

It's the golden syrup that gives them their binding power. The Anzac biscuits were stored in metal tins and remained crisp for their long journey over the seas.

Apart from being a clever recipe they are DELICIOUS. And completely addictive. And for the cliched part of the post-"Try stopping at one!".

As a youngster I indulged in making these simple yet tasty biscuits. They really are very easy to put together. And I'm sure most of you have these ingredients in your pantry.

My favourite part is biting into these and tasting the shredded coconut and the dark caramel flavours of the golden syrup.

Over the years I've seen people tweak the original recipe by adding nuts and other goodies but they don't really need it, in my opinion.

And it doesn't have to be Anzac Day to make these. Make them any time of the year. However, I think it's important to remember what they stand for. 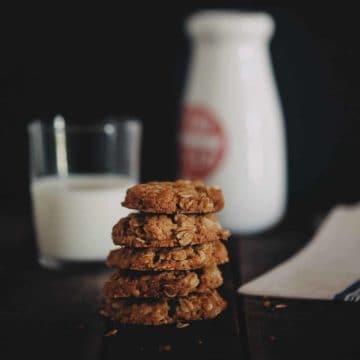 Nutrition Facts
Anzac Biscuits Recipe
Amount Per Serving (1 biscuit)
Calories 146 Calories from Fat 63
% Daily Value*
Fat 7g11%
Saturated Fat 4g25%
Carbohydrates 21g7%
Sugar 13g14%
Protein 1g2%
* Percent Daily Values are based on a 2000 calorie diet.
Made this recipe?Let me know how you went and tag @souvlakiman on Instagram!
Previous Post: « How to make Barbecued Ribs in the oven
Next Post: The best Getaway. Ever. »