I'm on another "lime rampage". However, these are not the regular green limes that I absolutely love to cook and experiment with in the kitchen.

A few weeks ago I was minding my own business, doing some grocery shopping.

In my midst I saw a haul of new fruits labelled "organic blood limes".

I'm not one to turn away from such things. Especially if it involves some kind of citrus!

I'd love to paint a picture and tell you I was at some local farmers market.  And that it was a sunny winters day. And that a lovely farmer explained what these organic blood limes were.

I was in the middle of a very busy Sydney shopping centre on a Thursday night.

On a whim, I picked up my shiny plastic box and off I went to pay.

A little late night googling and some conflicting internet research later, I found some information about these precious little fruits.

They are hybrid citrus fruit developed by the Australian CSIRO.

There's a whole of cross breeding going on here!  Phew!

And, you're probably curious about the taste. Blood limes are quite acidic and have a "crisp and clean" taste.

And they smell very mandarin-ey (ok that's not really a word).

My next concern was cooking with them.

I found a recipe for a salsa of sorts but that will have to wait for another blog post. I decided to do what I know best and that was to make a marmalade.

I had visions of making a chunky marmalade-like the ones you make with cumquats. But the skins are not edible on these fruit. It didn't matter in the end.

The marmalade was a success.

It was quite strong in the bitter department but in actually didn't mind that.

Even though it didn't yield much I still managed to enjoy it on some morning toast for breakfast.

Be wary that I took a different approach in preparing the blood lime marmalade.

I sliced them in half and boiled them with the sugar syrup and then proceeded to mash them up using a potato masher.  This squeezed all the juicy citrus goodness out, leaving the tough leathery skins behind.

A little unconventional but a time saver. 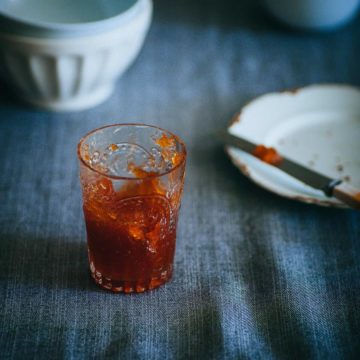