Buckwheat pita bread is my gluten-free version of Greece's famous pita made using buckwheat flour. It was an interesting experiment and it's suitable if you follow a gluten free diet. Coeliacs rejoice!

The only other time I had used buckwheat flour was when I made some buckwheat pikelets earlier on this year.

I was itching to do something else and decided to try my hand at recreating the famous souvlaki pita.

Notice how I said recreate NOT reinvent?

Anyway, as I've stated on numerous occasions, it's fun to play around with different ingredients. And I also enjoy the challenge of making something gluten-free with natural, wholesome ingredients.

How did these buckwheat pita bread turn out?

They were tasty however I did find them a lot more dense than the usual souvlaki pita. I had to use a lot more flour than I thought I would during my cooking experiment.

Plus they were quite filling. I can gorge two pita bread (with the works!) quite quickly, but I found one to be enough.

Another thing I noticed with these buckwheat pita bread - they were a little thicker than I had hoped. I'm hoping to rectify this on my next attempt.

They puffed up perfectly in the cast iron pan, and I highly recommend that you serve them warm with your desired meat and veggies.

What to serve with gluten-free pita bread

I had a few leftovers the next day, so I used them as pizza bases, and they were quite a hit with a friend's daughter who recently found out she's a coeliac.

I think these buckwheat pita bread would also make great pita chips. Serve them up with some avocado tzatziki, and you have a great party snack.

Enjoy your weekend everyone, and I'll see you next week with some more recipes. 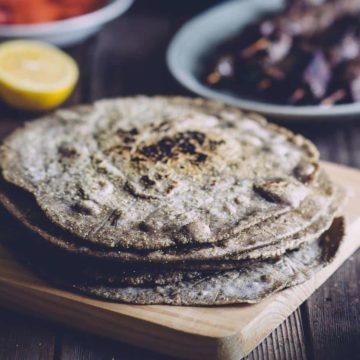 I used a 10 inch or 25cm cast iron pan to make these pitas. If you’re using a smaller one adjust the size as you roll them out.
You can put them in the fridge wrapped in foil and they can be reheated the next day in the oven.